Situated in eastern Asia, and on the western shore of the Pacific Ocean, the People’s Republic of China is the world’s third-largest country and covers a land area of 9.6 million km², with an inland and coastal water area of more than 4.7 million km² and an eastern and southern continental coastline extending for about 18,000 km.

China has the longest combined land border in the world, measuring 22,117 km (13,743 mi), more than any other country except Russia, and it borders 14 nations, more than any other country except Russia (which also borders 14). It is also adjacent to eight nations in the ocean. There are four municipalities directly under central government administration, 23 provinces, five autonomous regions and two special administrative regions. China’s maritime territory has 7,600 islands, of which Taiwan is the largest with an area of 35,798 km².

The most densely populated areas are in the east of the country, towards the coast and along major river valleys such as the Yangtze and Yellow River. With the largest population in the world, China has over 170 cities with more than a million people.

To the north, grasslands border Mongolia, and to the south-west the foothills of the Himalayas and Gobi Desert to the north-west are less-populated. The world's highest mountain, Mount Everest (8,848 m), lies on China’s border with Nepal.

The climate ranges from dry and very hot in the arid Gobi and Taklamakan Deserts in the north of the country, to subtropical forests in the wetter and humid south. Winters tend to be very cold, and summers very hot with monsoon rains in the south. 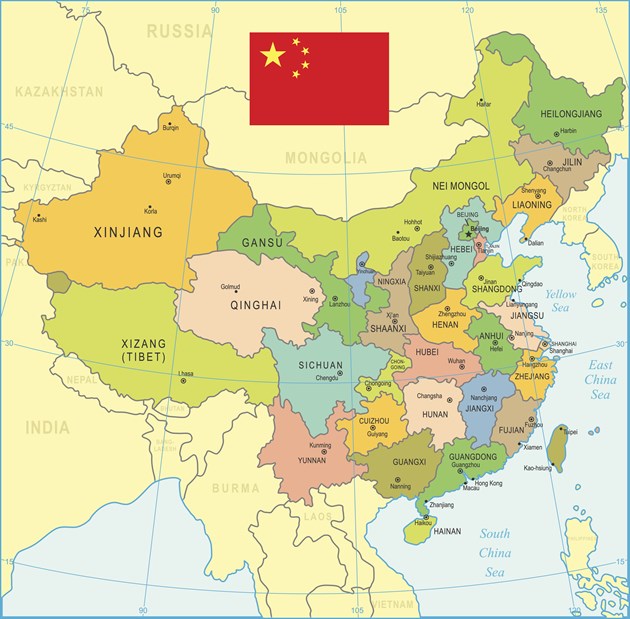 China is already the world’s largest economy on a purchasing power basis. The UK is one of the top European investors into China and Chinese investment into the UK has increased dramatically in recent years to establish the UK as one of the top destinations in Europe.

The Chinese Government is now seeking to rebalance the economy away from investment-led growth and towards consumption. The emerging focus on innovation, higher-end consumer goods and services represents a significant opportunity for UK companies.

However, doing business in China can be challenging. The 2018 World Bank’s Doing Business report ranks China 78th in the world for overall “ease of doing business” (http://www.doingbusiness.org/data/exploreeconomies/china) and according to the World Economic Forum China ranks 27th on the Global Competitiveness Index (http://reports.weforum.org/global-competitiveness-index-2017-2018/countryeconomy-profiles/#economy=CHN). While China has started to open up its economy in some areas, there are restrictions on the extent to which foreign companies can operate in large areas of the economy. Personal relationship networks can exercise significant influence. There is a widely held perception that local companies may also enjoy greater political protection, including from local courts.

The team at DIT China and the China-Britain Business Council (http://www.cbbc.org/) are on hand to support and advise UK businesses who are considering entering the Chinese market.

Benefits of the Chinese market

There are a number of reasons to choose China as an export destination:

Read the UK Department for International Trade’s guide for UK businesses: “selling goods and services into China” at: https://www.gov.uk/government/publications/guide-for-uk-businesses-selling-goods-and-services-into-china.

China’s Foreign NGO Management Law came into effect on 1st January 2017. The law applies to all non-profit, non-government organisations (NGOs) legally established overseas (including Hong Kong, Macao and Taiwan) that wish to register offices or conduct activities in mainland China. Organisations that do not register or report activities under the law will not be able to legally operate in mainland China or transfer funds to locally-established NGOs.

The Communist Party of China (CPC) is the founding and ruling political party of the People’s Republic of China. Within the CPC, the Central Politburo Standing Committee (PBSC) is China’s highest and most powerful decision-making body. Current members, formally appointed at the 19th National People’s Congress in October 2017, are (listed in order of seniority):

What the 19th Party Congress announced for future business

President Xi repeatedly emphasised that China’s foreign policy will not change and the protection of the interests of foreign investors will continue to be important.

For British business, opportunities in the following areas may be worth attention:

President Xi has mapped out a prosperous future for China over the next 30 years, to build China into a “strong and powerful” nation standing firmly on the world stage by promising “the nation’s economic and technological strength will have increased significantly, ranking among leading countries in innovation” by 2035, and “becoming a global leader in terms of composite national strength and international influence”.

CBBC’s message to UK companies does not change. This is the time when UK businesses have their greatest competitive advantage in China – as the services and products in which the UK excels fit well into China’s ‘new era’.

Since the economic reforms and ‘opening up’ policy of the late 1970s, China has experienced a period of rapid economic growth, averaging almost 10% per annum for the three decades up to 2010. Over this period China’s economy effectively doubled in size every eight years.

Despite this, China is yet to become a high income country. Income per capita remains behind the advanced economies and it is ranked 90th in the world in the UN’s Human Development Index in 2015.

The top ten industries importing into China are:

You can read more about what China imports at World’s Top Exports: http://www.worldstopexports.com/chinas-top-10-imports/.

Official data showed China’s industrial value-added growth slowed further from 6.4% in July to 6.0% in August 2017 over the same period the previous year. The slowing was mainly in the mining sector, which contracted 3.4% due to production cuts of environmental protection measures.

Growth of fixed asset investment softened to 7.8% in the January to August period. Within this, public sector investment grew 11.2%, while private investment, accounting for 60% of total investment, dipped to 6.4% in the first eight months, suggesting private SMEs are still facing challenges in accessing finance for investment.

Infrastructure investment, an important driver of total investment, grew 19.8% in the January to August period, slowing from nearer 30% early in the year as new controls over local government debt and tighter PPP funding began to bite.

Growth of manufacturing investment grew at 4.5% January to August compared to 5.5% in the first half of the year, in line with slowing industrial production.

On the other hand, real estate investment held up, expanding 7.9% in the first eight months. However, as financing channels narrow, developers have to rely more on sales returns for future investment, which could be a potential problem as housing sales cool down and inventory has peaked.

Continued trade tensions between China and the US and the strengthening US Dollar continue to concern analysts.

Official data showed average new home prices in China’s 70 major cities grew 8.3% in August over the previous year, marking the ninth consecutive monthly deceleration from a peak in December 2016. In particular, for the first time in three years, housing prices in China’s 15 most popular cities for property investment all stalled on a monthly basis six months after the government introduced tightening measures.

However, official data also shows house prices in smaller tier 3 and 4 cities rose 0.4% in August over July, faster than the national average of 0.2%, indicating speculators are heading from big markets to smaller cities. According to a recent survey by the central bank, nearly a third of Chinese households believe housing prices will keep rising in the coming months, despite tightening measures.

Official data suggests growth of China’s money supply (M2) weakened further to 8.9% in August from 9.2% in July over 2016 as financial regulatory tightening continued in the shadow banking sector.

Meanwhile, credit growth remained steady. In August new increased total social financing and bank loans, largely corporate loans and mortgages, were both higher than July. Growth of stock of TSF and bank loans remained at 13.1% and 13.8%, respectively, in August.

This was the last official data release before the 19th Party Congress. The government argued the numbers show improvement in the ‘quality’ of growth. It emphasised, through supply-side reform (such as administrative capacity cutting in heavy industries and intensified environmental protection measures), that economic structure is improving and new growth engines are strengthening.

However, for the first time since 1999, in September 2017 Standard & Poor’s cut China’s sovereign credit rating by one notch, warning medium term economic and financial risks after “a prolonged period of strong credit growth”.